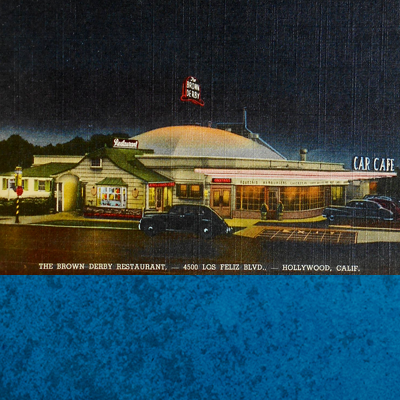 The most famous of the four Brown Derby restaurants was the original built in 1926 on Wilshire Boulevard in Los Angeles. The location on Los Feliz Boulevard at Hillhurst Avenue above Hollywood near the Greek Theater started off life in 1929 as Willard’s Chicken Inn, home of the “Far-Famed Chicken.” The dome was designed to have water piped up to the top where it would run down the exterior like a fountain. The design also served as an early form of air conditioning. Willard’s closed down in 1940 and the restaurant was renovated to become a Brown Derby. Added on to the original restaurant were a Car Cafe, and on the Hillhurst side, a Brown Derby Liquor Store. In 1960, the property was purchased by actor Michael St. Angel and became Michaels of Los Feliz until 1992. Since then the building has seen numerous reincarnations, and is now the home of the MessHall Kitchen.