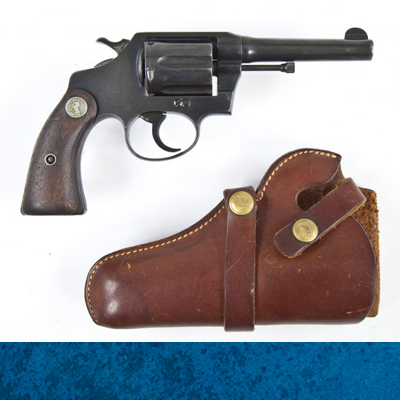 One of the most popular revolvers with police departments during the 20th Century was Colt’s .38 Police Positive. The “Positive” referred to the Positive Safety Lock that prevented the firearm from accidentally discharging if was dropped. The revolver arrived on the scene in 1907 and by 1933 was standard issue with police departments in Chicago, Cincinnati, Columbus, Kansas City, Los Angeles, New York City, Portland, St. Louis and San Francisco. Other law enforcement agencies who standardized on the Police Positive were the FBI, plus the state police in Connecticut, Delaware, Maryland, New Jersey and Pennsylvania. The reason for the handgun’s popularity was the compact frame plus excellent accuracy and durability firing the .38 Colt Special round.  Colt also actively marketed the weapon to families and the military. The Police Positive was manufactured with 2-inch, 4-inch, 5-inch and 6-inch barrels. The snub-nosed model arrived in 1927 christened the Detective Special and did not go out of production until 1995.