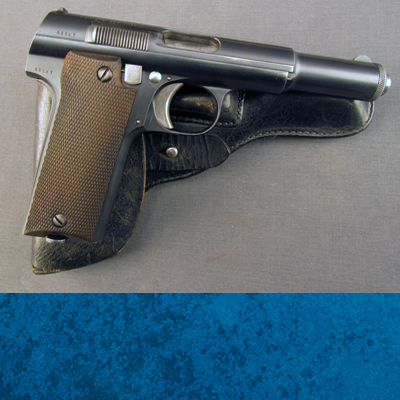 Astra-Unceta y Compañía SA was a gunmaker in Spain well known for high-quality pistols. The Astra 400 became the standard firearm of the Spanish military after 1921. German troops and airmen were introduced to the 400 while serving in the Spanish Civil War during the 1930s and were impressed. That impression was favorable enough for the Germans to purchase 6,000 of the handgun in 1941. But as the pistol was designed for 9mm Largo rounds, and that ammunition was not produced in Germany during World War II, an order was placed for a new version of the gun chambering Germany’s standard round, the 9mm Parabellum.  This lighter and shorter model became the Astra 600. Ultimately, almost 60,000 were produced, but just over 10,000 were delivered before the Germans lost access to the French/Spanish border in 1944. Most of the undelivered Astra 600s were sold a second time to the new West German government after the war for police use.